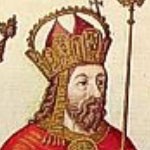 Carlo IV, Giovanni of Luxembourg's son, already Lord of Lucca from 1331 to 1333, he inherited the reign of Bohemia, he was elected king of the Romans in 1346 and then crowned emperor of the Holy Roman Empire in Rome by a legate of the pope Innocenzo VI in 1355.
He maintained a policy favorable to the church, but he particularly focused his politics on the Bohemia, where he established a strong centralized state and elected Prague as the empire's capital.
He was invoked by Petrarca and Cola di Rienzo to restore his sovereign prerogatives sorting Italy's order, but Carlo IV wasn't committed on the peninsula's politics. He went two times in Italy, in 1354-1355 and in 1368-1369.
Once he took the decision to rework the geopolitical map of Tuscany, in 1369 he established himself in the Augusta palace, he expelled the Pisa's governors and declared the freedom of Lucca restored. The people of Lucca gathered in the "San Michele in Foro" square and gave homage and vowed loyalty to Carlo IV.