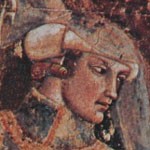 According to tradition, Castruccio Castracani was born in Lucca on the 29th of March 1281, son of Gerio Castracane and Puccia Streghi. He was born into one of the richest families in Lucca, with mercantile and money-lending operations in Europe, France and Flanders in particular, and enormous property and feudal assets at home. In 1301 he and his family were forced into exile for political reasons. He spent some time in England but had to flee because he killed a man. Having given up being a merchant, Castruccio became a soldier, probably in the army of Philip the Fair in Flanders and then in north Italy. In 1313 he was in Pisa at the head of the Ghibellines who had been exiled from Lucca and intended to return there. He worked closely with Uguccione della Faggiola in the invasion and sacking of Lucca in 1314 and shortly after took possession of Lunigiana.
After Uguccione’s rule of Lucca and Pisa was overthrown in 1316, Castruccio was first elected war governor and head of the army in Lucca and finally, in 1320, Lord of Lucca for life. He was also head of and point of reference for the Ghibellines in Tuscany and Liguria. With a policy of aggression towards Florence coupled with his military gifts, he succeeded in bringing the northwest part of Tuscany under his control.
He became Emperor Ludwig the Bavarian’s most important Italian ally and, in 1327, obtained from him full legitimisation of his military conquests with the hereditary title of Duke of Lucca, Pistoia, Luni and Volterra, and Imperial Vicar of Pisa. In 1328, he accompanied the emperor to Rome for his coronation in St Peter’s.
He died suddenly of malaria on the 3rd of September 1328 in his Augusta Fortress. His military feats and the history of his life became the stuff of legends handed down and retold over the centuries. Niccolò Machiavelli saw in him the perfect, ruthless example of his Prince.