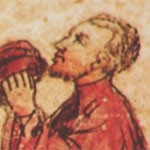 Son of the notary Iacopo di Ser Cambio of Massarosa, the apothecary Giovanni Sercambi was one of the most skilled political men from Lucca. He consistently had a role in the Republic's govern during the end of the XIV century, designed with more and more important tasks before he performed his duties as Elder and as the Gonfaloniere.
He planned and executed, from the Palazzo's rooms, the coup d'etat which led Paolo Guinigi to power.
During the Sercambi Signoria he kept a privileged place in the State council. Despite the public errands he didn't interrupt his commercial activity; his apothecary often supplied the Palazzo's chancellor's office and Paolo's court with paper, wax, spices and medicines.
He wrote a collection of 155 novellas, but the biggest work he left us is his “Croniche” which illustrate the history of Lucca from 1164 to 1424. This is one of the best sources for the late medieval history of Tuscany.