The room named after the Chamberlains – this was the title given to the members of aristocracy who had the privilege of belonging to the court – is dominated by a decorated stucco ceiling created by Paoli and Guidotti. Divided into geometric panels, it has a rosette of acanthus leaves at its centre, surrounded by Maria Luisa of Spain’s name who commissioned it, and therefore today the room is named after her. From the geometry of the central circle, set in a square, there is a passage to the rectangular form of the room by means of extended panels with shoots, festoons and masks. On the short sides, two pairs of Putti support vases and garlands. The frieze of the ceiling is divided into twelve panels with ornamental groups of arms in each of the four corners. On the long sides, two pairs of griffins with acanthus volutes face the goddess Pallas Athena, protector of
letters and peace. On the short sides, two scenes testify to the magnanimity and greatness of Emperor Charles V. The four doors are made of walnut wood with decorations in gilded bronze, and above them stucco allegories of Justice with her sword and scales can be seen, a Victory figure with a laurel and a palm branch, Temperance with her reins and Prudence with the serpent and a trumpet. The dado that runs through the entire length of the room shows alternating classical elements in stucco, such as tripods, shields and arms. The composite marble floor in three colours is inlaid with the lilies of the Bourbon family. The white marble fireplace is decorated with two heads of Minerva and two torches in gilded bronze. The design was probably made by Lorenzo Nottolini. The interior of the fireplace is covered with a majolica. 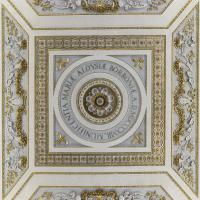 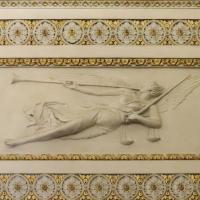 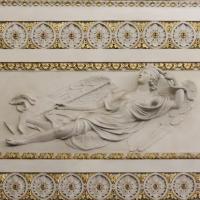 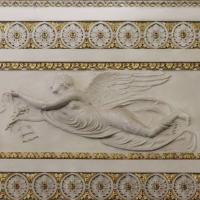 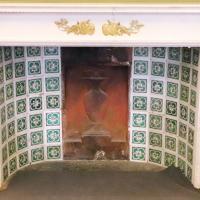 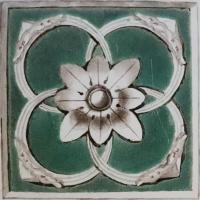 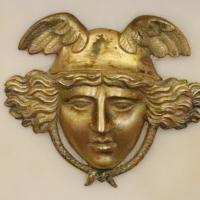